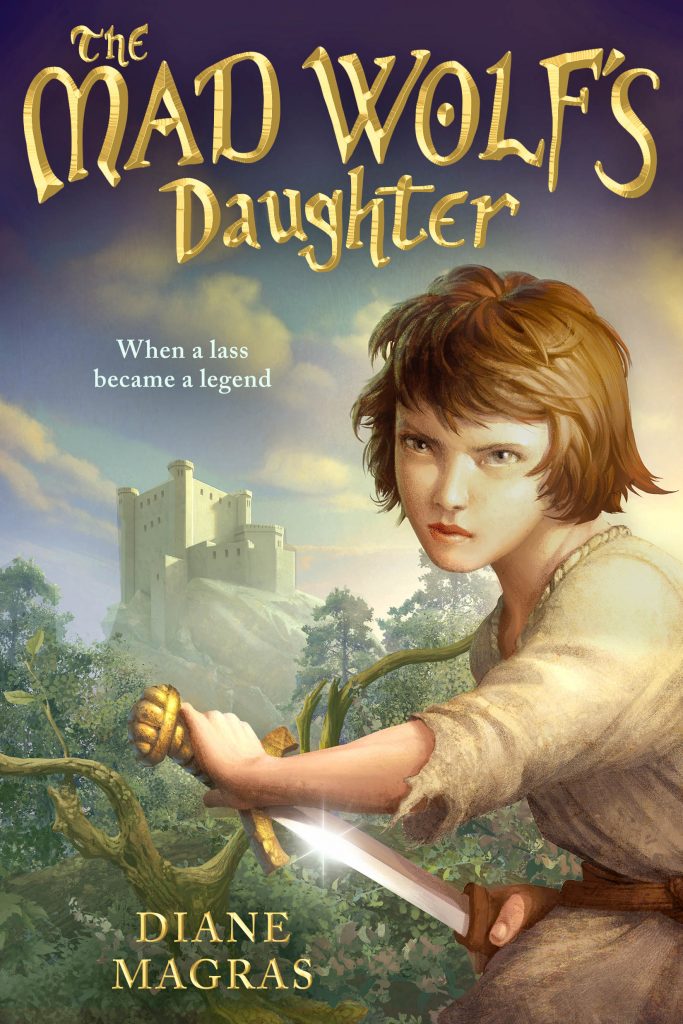 One dark night, Drest’s sheltered life on a remote Scottish headland is shattered when invading knights capture her family, but leave Drest behind. Her father, the Mad Wolf of the North, and her beloved brothers are a fearsome war-band, but now Drest is the only one who can save them. So she starts off on a wild rescue attempt, taking a wounded invader along as a hostage.

Hunted by a bandit with a dark link to her family’s past, aided by a witch whom she rescues from the stake, Drest travels through unwelcoming villages, desolate forests, and haunted towns. Every time she faces a challenge, her five brothers speak to her in her mind about courage and her role in the war-band. But on her journey, Drest learns that the war-band is legendary for terrorizing the land. If she frees them, they’ll not hesitate to hurt the gentle knight who’s become her friend.

Drest thought that all she wanted was her family back; now she has to wonder what their freedom would really mean. Is she her father’s daughter or is it time to become her own legend?

From The New York Times: “Drest is a ferocious heroine…it’s clear we’re in the hands of a master storyteller….The Mad Wolf’s Daughter feels like an instant classic.”

From Publishers Weekly (starred review): “Empathetic, bold, and entirely herself at a time when women were dismissed as weak, Drest shines in this fast-paced adventure.”

From Fuse 8 Production (a School Library Journal blog): “It may be set in 13th century Scotland, the land of bogs, but nothing in Diane Magras’s high-spirited tale is ever (forgive me) bogged down. Fast on its feet, never slowing, never stopping to catch its breath, and yet filled to the brim with complex character development and personal growth, Magras pulls off one of the trickiest conjuring tricks I’ve seen. Behold! A book able to pull depth and meaning out of frenzy. Come one! Come all! You never saw the like.”

From Publisher’s Weekly Galley Talk: “A rising tide lifts all boats, they say, and it is apropos to storytelling as well. A great story elevates all its constituent parts. Sure, it’s true that The Mad Wolf’s Daughter is a middle grade fantasy with feminist elements, a strong young heroine, an informed exploration of relevant social issues, and the transposition of established gender roles, but it is the book’s great storytelling that makes all its components shine.”

From Kirkus: “In this fresh take on the chivalric romance, it’s wee lass Drest who becomes a legend as she journeys across 13th-century Scotland’s remote coastal headlands to rescue her da and brothers, the Mad Wolf and his band, from Faintree Castle.”

“I loved it. A heart-warming and heart-pounding adventure, chockablock with mysteries and deceptions, dangers and disasters. Ultimately a tale of friendship, loyalty, and the illusive nature of truth, The Mad Wolf’s Daughter will carry you away.” —Karen Cushman, Newbery Medalist and author of Grayling’s Song

“Clever, quick, brave, tough, loyal, protective—Drest is the best type of hero, striving to be kind and just, even when ‘right’ and ‘wrong’ are hard to define. The Mad Wolf’s Daughter pulled me in, and I felt delighted and taken care of. Go, Drest!” —Kristin Cashore, New York Times bestselling author of the Graceling Realm books and Jane, Unlimited

“A gripping adventure with a marvelous heroine – I can’t wait to read more!” —Catherine Gilbert Murdock, author of Dairy Queen and The Book of Boy