I’ve always loved monster stories where the “monster” isn’t evil and, while creepy and maybe a bit scary, is there to do good. Most ghost stories don’t do this. In middle grade fiction in particular, ghosts are common devices of spooky evil. And so the fact that the protagonist of Kyle Lukoff’s Too Bright to See lives in a haunted house but was taught by her uncle to love the house and not worry too much about its ghosts made me sure I’d enjoy this novel. 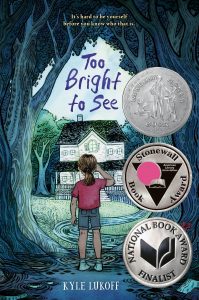 Lukoff does a beautiful job creating a warm, gentle story of a kid who isn’t comfortable in her own skin—and certainly not the clothes and makeup that her best friend Moira wants her to wear. Bug lives in rural Vermont, where everyone knows everyone else. There are clear expectations for middle school, as Moira tells her. Their first year of middle school will be an opportunity to remake themselves anew.

But Bug resists Moira’s attempts to remake her into a girl who looks and acts like a girl—which Moira is certain will help them both fit in at their new school. To Bug, it doesn’t feel right. She wishes she could talk with her late Uncle Roderick about this. He was the kind of uncle she could talk with about anything.

While Bug misses her uncle immensely, she isn’t sure that she wants him to come back as a ghost. But early in the novel, it certainly seems as if he has—and he has a message for her. There’s something important she needs to figure out: a secret that will change her life.

And it’s a secret which I can’t give away (in fact, Lukoff writes in the author’s note precisely how to talk about this book so that reviewers don’t reveal the secret). I loved this story for its secret, and for the warmth and caring that surrounds Bug as she struggles with her identity. Uncle Roderick’s character comes through clearly, not as his ghost, but as Bug’s memories of him.

And that love between family members, and Bug’s coming-of-age, will feel real, strong, beautiful, and familiar to just about every reader who gets into this sweet, refreshing story.