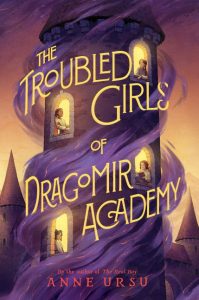 The Troubled Girls of Dragomir Academy is Anne Ursu’s latest delight. I’m one of her fans—Breadcrumbs and The Real Boy were inspirations to me when I first began writing middle grade fiction—and I saved this as a special treat.

Talk about special treats. This was one of the best books of the 2021 for me, and also one of my favorite books ever, a classic on my shelf.

One reason is that it’s such a clever story. Ursu introduces a strong premise, then layers questions and mysteries upon it. The story spreads out—complicated and rich—and then slowly comes together. In the end, Ursu neatly ties the answer to the book’s core mystery to the society’s whole structure. This is no less than a brilliant feat of storytelling.

Here’s the story: Marya Lupu is a girl in a society that represses girls as a matter of course—though she believes in her right to be herself (a little bit). Whisked away to a school for “troubled” girls after a mishap during her brother’s magic test (which would have marked him as an all-important sorcerer if there were any magic in him), Marya’s self-belief begins to crumble. And that’s no wonder: She’s been shown in no uncertain terms that she doesn’t matter in her world, that her family doesn’t care what becomes of her, and her best future would be on a sorcerer’s estate in one of the supporting roles that women always have. Marya tries to see Dragomir Academy as an opportunity for the education she was denied at home. She also tries very hard to be true to herself, and this will win over many young readers.

Marya is thoughtful, brave, capable of intense self-reflection, and questions everything. She’s cautious, though, and at first attempts to follow the rules. As a young reader, I would have noticed the relentless demand of Dragomir Academy to follow the rules, and would have begun to challenge them just as Marya does. Marya also asks, “Who does the story serve?”, a question that becomes power, a means of seeing through the tangle of secrets and lies.

All the secrets and lies build into a magnificent conclusion. This is a deeply satisfying book that will both give its readers important tools for reflecting on their own lives, and stay in their minds for long, long after.

These little wild berries (not sure what they are, but they volunteered in the center of a pine shrub) are such a sign of hope and sustenance in this harsh landscape.

This is the kind of thing you might see around our house: a bunny wearing glasses. It began as a joke between my husband and our charming teenager, but the glasses have stayed on the bunny, who has remained on our sofa. And why not? The chap looks rather dapper, after all. I love my family.