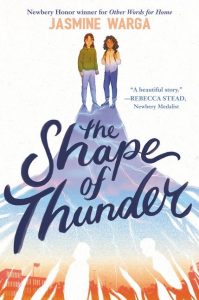 I’ll share this right away: The Shape of Thunder is a book about a very tough topic: the aftermath of a school shooting and how those closest to it deal with it.

Jasmine Warga makes this topic bearable for a young audience through several brilliant technique, and here’s the first: She sets the story a little less than a year from the tragedy, providing distance. And she shows how some people have moved on (like the community). But not Quinn, the sister of the shooter, or Cora, the sister of one of his victims. Both are still struggling with their grief, loneliness, and love for their lost sibling. The other people in their households are trying to move on, with varying levels of success. And their efforts aren’t helping either girl.

The story is largely about Quinn’s plan to save their siblings through time travel. This isn’t sci-fi, but an attempt to harness science with those moments and places that evoke in us experiences beyond our understanding. And it stems from desperation: Quinn misses Cora, her former best friend, who won’t talk with her. And Quinn has a secret—something she saw at home—that makes her blame herself for her brother’s actions. Cora, meanwhile, keeps her sister’s part of the room they shared exactly as it was, and cannot forget or let go. All of this turns into another chapter of the ongoing tragedy.

This may sound like a challenging read, but it’s not, and therein lies Warga’s skill: Each girl has people around her who care and want to help. Nearly every adult is warm, and most of the kid characters are supportive. And yet even though this warmth, adults make mistakes, fully-formed characters with their own story arcs, and feel utterly real. But they try. And that means a lot.

In this way, Warga has written a book that will make kids who love to cry at realistic middle grade fiction have that reaction, but will also satisfy kids who want just warm family-and-friendship stories. It’s a gem.