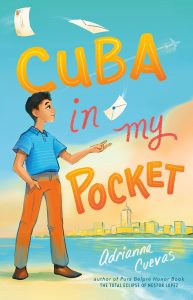 Like two of my characters in Secret of the Shadow Beasts, I love history and  historical fiction. Because I’ve read a lot of this genre (and written it!), I have very high standards. For me, the research needs to be spot-on, making the world feel real and full of life, and wholly individual. So many historical stories of certain time periods feel like every other story set in that time, the setting and motivations so predictable that I sometimes wonder why people are still writing them. When I come across a historical novel written about a time period or experience you don’t often see in children’s fiction, I’m delighted. And when the writing is spectacular, I’m thrilled.

Cuba in My Pocket, one of the best works of historical fiction for children that I’ve ever read, surpassed my high expectations. Adrianna Cuevas begins this powerful story in a tense and vivid Cuba. It’s 1961, and Fidel Castro is newly in power. Soldiers rule the streets, harassing families that have any member who has ever disagreed with the regime—or challenges it now in any way the regime defines.

Cumba, the protagonist, is constantly aware of that danger. He’s facing a ticking clock: When the revolutionaries deem him old enough, not even his father’s status as a doctor will protect him from being taken away and forced to train as a soldier. Cuevas’s portrait of a certain revolutionary who has his eye on Cumba is particularly terrifying. Fortunately, Cumba escapes to the U.S. in the nick of time. His journey alone is tense and frightening, though, and the reader will let out a sigh of relief when he arrives.

And here is part of Cuevas’s brilliance as a writer: She gives the reader a moment to breathe, a period of warmth and safety, before introducing the next conflict.

Cumba is safe at last. He’s living with a kind host and two other Cuba immigrants, so he’s not completely alone. But life isn’t easy. He can’t stop thinking—and worrying—about his family back in Cuba. English isn’t an easy language to learn. And his loneliness is overwhelming: He’s been parted from everything he knew and loved. His world is bleak, in a different way from before, but no less powerful.

Yet the storytelling is not bleak. Even in the tensest scenes, Cuevas balances the terror, loneliness, and worry with hope and warmth: interactions between Cumba’s family, the food they share, the basic kindness of some people in the U.S. This is a marvelous book, filled with tension, despair, and hope. And it’s a vivid look at an important historical moment.