Yesterday I posted my favorite middle grade books from the first part of 2020. Here’s the rest from the second half of that year! 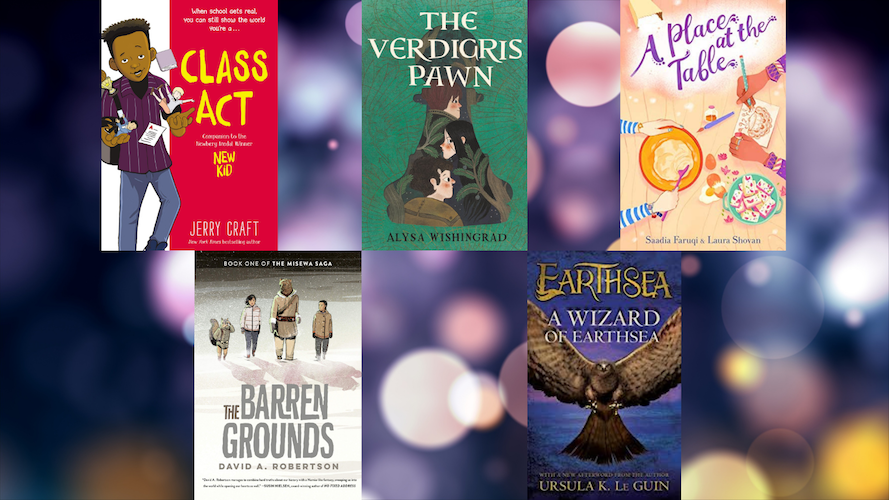 Class Act by Jerry Craft
Jerry Craft’s New Kid, the first book in this graphic novel series, dealt with casual racism and micro-aggressions head-on (in a compelling and sometimes funny story of a Black student’s experiences at a new and primarily white school). This second book in the series touches on those same issues from a different Black character’s perspective. It also goes deep into privilege and differences and how hard it can be to be friends with people whose backgrounds and life experiences seem light years away from your own. Funny in places like the first, but incredibly thoughtful.

The Verdigris Pawn by Alyssa Wishingrad
This debut by Alyssa Wishingrad is coming out in July 2021, but I was fortunate to have an early read. The book is magnificent. I loved the gentle boy who leads the story and finds his strength where he doesn’t expect, and the determined girl who introduces him to the real version of the world he’s meant to one day rule with an iron fist. This story is packed with themes of authority and privilege, depicting how corruption can spread easily if you don’t watch out, and how we all need to stand up for the rights of each other.

A Place at the Table by Saadia Faruqi and Laura Shovan
I make a point of reading everything that’s coming out by these two authors, so it was quite fun to read a book they’d collaborated on. And what a fantastic book. Two characters from two different cultural backgrounds—Muslim-American and Jewish-American—become friends in a cooking class taught by the mother of the first one. Expect a great story about friendship and food, as well as a depiction of how differences are good for our world.

The Barren Grounds by David A. Robertson
This powerful story stars a pair of First Nation foster kids living with a white family in Winnipeg, Manitoba, who discover a portal to a world that reflects their heritage. There, time is different. Animals speak, wear traditional clothing, and follow traditional lifestyles. And everyone is worried about the hardships of a winter caused by a visitor to the land who took over far too much. A new version of Narnia that includes an important historical note as well: the impact outsiders have had on First Nation people and their traditions. And the main character, Morgan, is a fantastic edgy voice to add to middle grade lit.

The Wizard of Earthsea by Ursula K. LeGuin
For some reason, I hadn’t read this classic children’s fantasy, a book that helped build the genre, until this year. But I’m so glad I did. This stands up well with its wildly imaginative world and characters, and feels relevant today. It’s a story of growing up, of dealing with power and temptation, and facing one’s greatest fears. It also stars a protagonist of color in a world where people of color dominate, back when readers rare saw that in books for kids (the author mentions in her note that, to her great annoyance, cover art for this book often depicted her main characters as white).

We’re sharing the chair now with me in charge of the writing (see my last two reels for context).

Isn’t it like a massive dose of marshmallow frosting? Or a drippy cloud. Or a cuddly blanket holding that tree close.

I love this billowy, beautiful snow no matter what simile one might think of!