If you’ve read my blog or follow me on social media or heard me speak, you probably know how much I am obsessed with Scotland. It wasn’t always that way, though. But I met Scotland at a pivotal time in my life.

I first visited Scotland when I was 13 years old. I was with my parents and my two brothers on a long trip to the U.K. and we drove up from London, through the Lake District, to Edinburgh. I remember stone everywhere, Edinburgh Castle’s cannons, eating chocolate, and being wet! I had fun, but I didn’t return for many years. (The affordability of it was part of the reason.)

Fast forward to 2015. My mother, one of the best friends I ever had, died of ALS. In her final days, I couldn’t be with her in person, but I called 4 or five times each day. I kept a list of stories and told her about memories we shared over the phone. She couldn’t talk but I hoped she could hear me. Among other things, I described the many wonderful trips we’d taken. 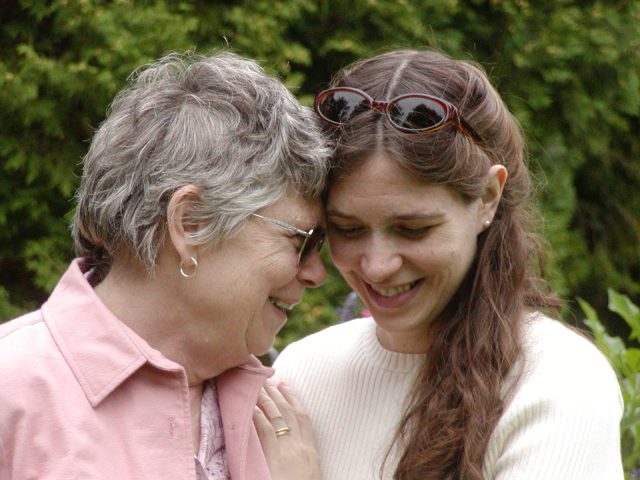 After she died, my older brother and I had a conversation about one of the things we learned from Mom during her illness: the importance of appreciating what was beautiful and doing things for yourself—a bit of the classic carpe diem philosophy, though appreciating beauty was a big part of it. My brother, who is a professional rafting guide in northern California, went river rafting in Costa Rica. My husband, son, and I planned a trip to the U.K.

When we planned our trip, it was late fall 2015. I’d just finished a near-final draft of The Mad Wolf’s Daughter and I wanted to take a research trip to a place filled with castles. I asked friends on Twitter where I could find the best castles. A few people recommended the Scottish Borders. I saw what was there (many castles! tons of history!) and was hooked. 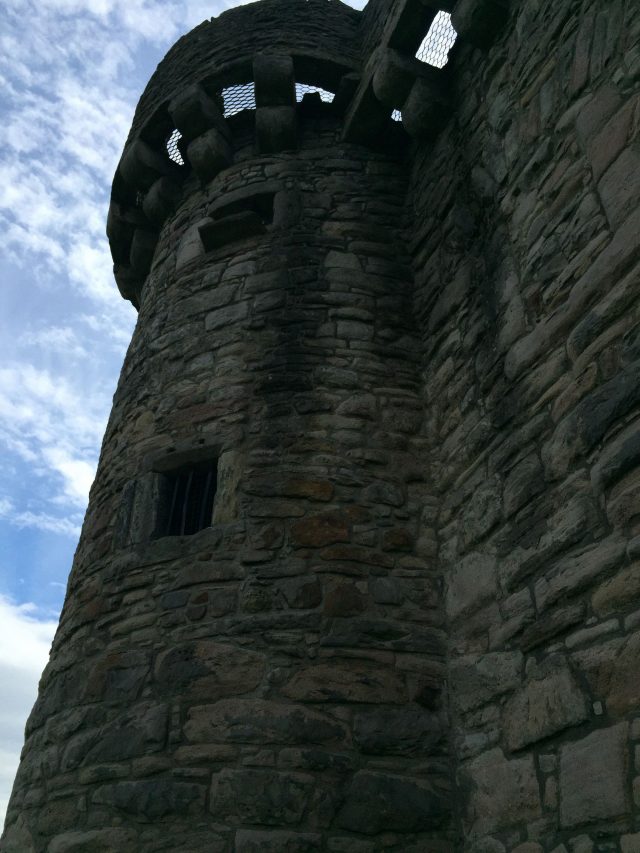 In early 2016, I signed with my literary agent for Drest’s story. And just as we were leaving for our trip, literally at the airport in New York en route to Edinburgh, I had my first chat with my editor, who wasn’t my editor then but who was interested in my novel.

Scotland and the Borders were a dream. We kept to Edinburgh and the Scottish Borders and dipped down to England to visit Corbridge and Hadrian’s Wall. 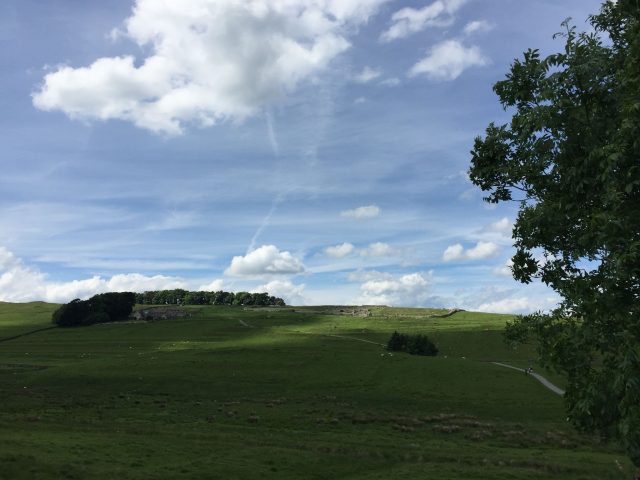 Hadrian’s Wall, outside of Corbridge, England

I drove everywhere in a little car, on the left side of the road, and loved it. I was where I belonged surrounded by the things I loved: castles and history. I kept thinking of my mom, who would have also loved the history. (She was big on learning.) I was in a state of near-constant beaming. 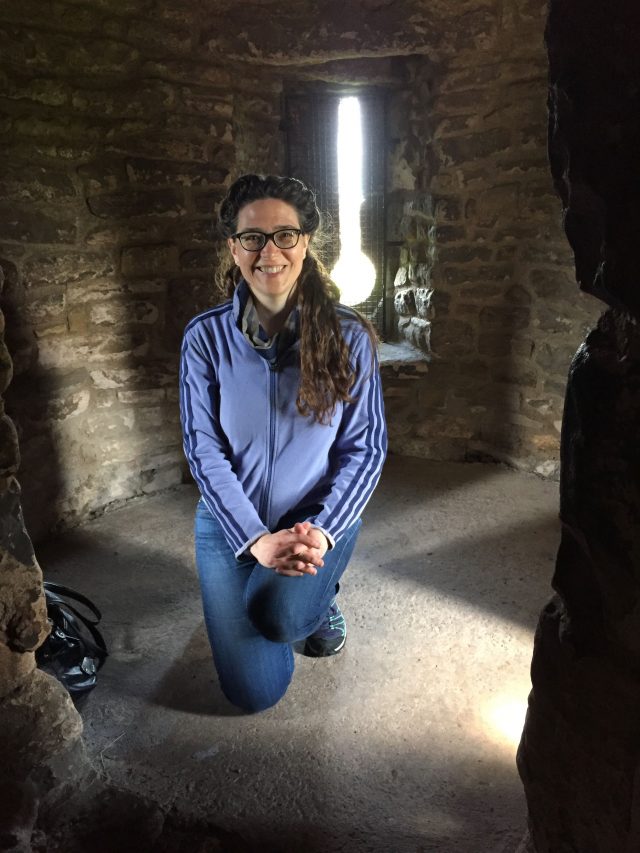 One of my favorite castles to visit was Craigmillar Castle in Edinburgh (on the outskirts of the city). As soon as I saw it, I knew this was a place that would matter. I took so many pictures. At that time I was thinking of another Drest book, one that would feature a strong noblewoman* with her own castle with a secret passage. This, Craigmillar, was going to be its façade. (*That strong noblewoman became Lady de Moys and the book became The Hunt for the Mad Wolf’s Daughter.) 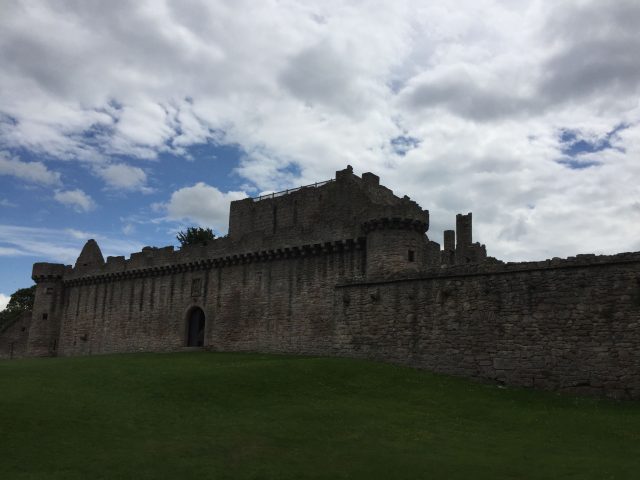 I was inspired, in my element, and very happy. We drove down to Jedburgh to stay in a cottage on a sheep farm (parts of this feature in a coming book, by the way), where I checked my email… …and learned that my editor was making an offer for Drest and her world! Suddenly, the story of my wee lass was going to be a book.

I wrote The Mad Wolf’s Daughter a few months after my mother died. I wanted to write something that would help me escape my grief. So I wrote a story about what I loved most and what I’d always wished I could have read as a child. I learned it would become a book in a place I visited because of Mom. 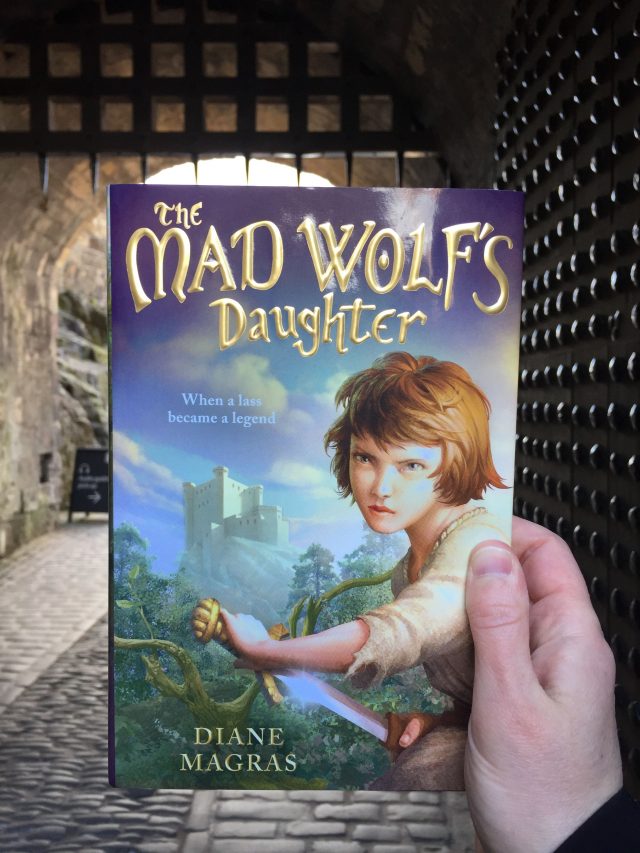 I wish Mom could have seen Drest outside Edinburgh Castle’s Portcullis Gate. I can just imagine her smile.

Thank you, Mom, for teaching me so much about how to live. I miss you.

5 Responses to “On Inspiration, My Mom, and How Drest Entered the World”