Happy New Year, everyone! I wish you all a joyous, peaceful, warm, and creative year filled with the light you need in your particular lives.

For me, I’m looking forward to editing a new book that I’m very excited about. More on that when it’s closer to publication.

Today I looked back on some of my favorite memories of 2019. A big one was the trip my family took to Scotland. When I do research on the ground, I cast my net wide. I usually visit four or more castles and thoroughly explore them, hunting for details that will be useful in my settings. But in 2019, with my husband and son backing me up all the way (as they always do, kind souls that they are), I decided that I’d do a deep dive into the history, people, and architecture of my favorite city instead: Edinburgh. Here’s a taste of that.

We begin, of course, with a castle. 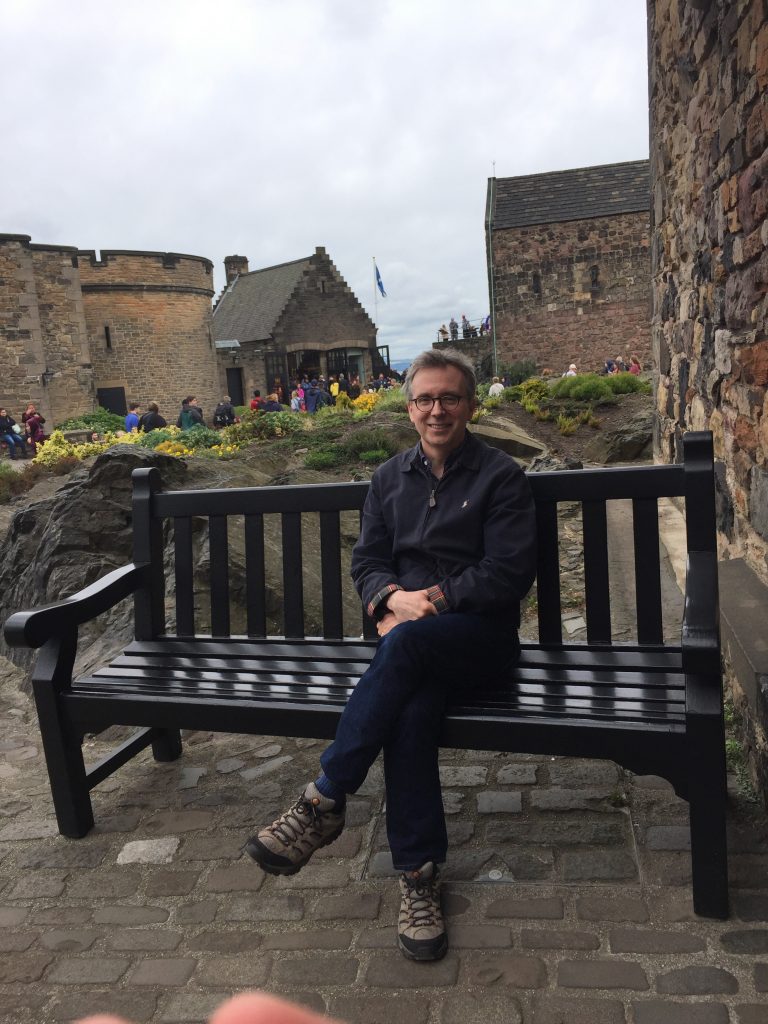 My son prefers not to have his photo shared on social media and the like, so you won’t see him in this post, though he was a wonderful companion on this trip. However, you will see the other important gentleman in my life: my husband Michael. He’s kindly posing for me at Edinburgh Castle. He enjoys castles and history, but isn’t obsessed the way I am. Yet he never shows any hesitation to go off to visit any castle or historical sight to which my obsession leads me.

Edinburgh Castle is a fascinating place. When rediscovered in a state of disuse in the 1800s, it was envisioned by many as a crucial historic site (which indeed it is), leading to its enthusiastic preservation. But remember: Medievalism was quite fashionable and romantic then, and a frequent subject in works of art that paid more attention to beauty than accuracy. The good 19th century preservationists of this castle also reinterpreted much it, rebuilding with a 19th century idea of what history looked like. Those parts  aren’t historically accurate from a medieval or Renaissance sense, but they feel like walking into a pre-Raphaelite work of art, and are fascinating as such. And the ground hold a wonderful modern-day museum of the war history, which include the periods when it was used as a POW camp during the American and Napoleonic wars (those are thoughtful and beautifully accurate). That’s why I love this castle: Its many reincarnations are represented, which is something you don’t often see in castles.

And, to loop back to what I was writing at the start, it’s lovely being married to someone with whom I can discuss this kind of thing as we visit such sites. 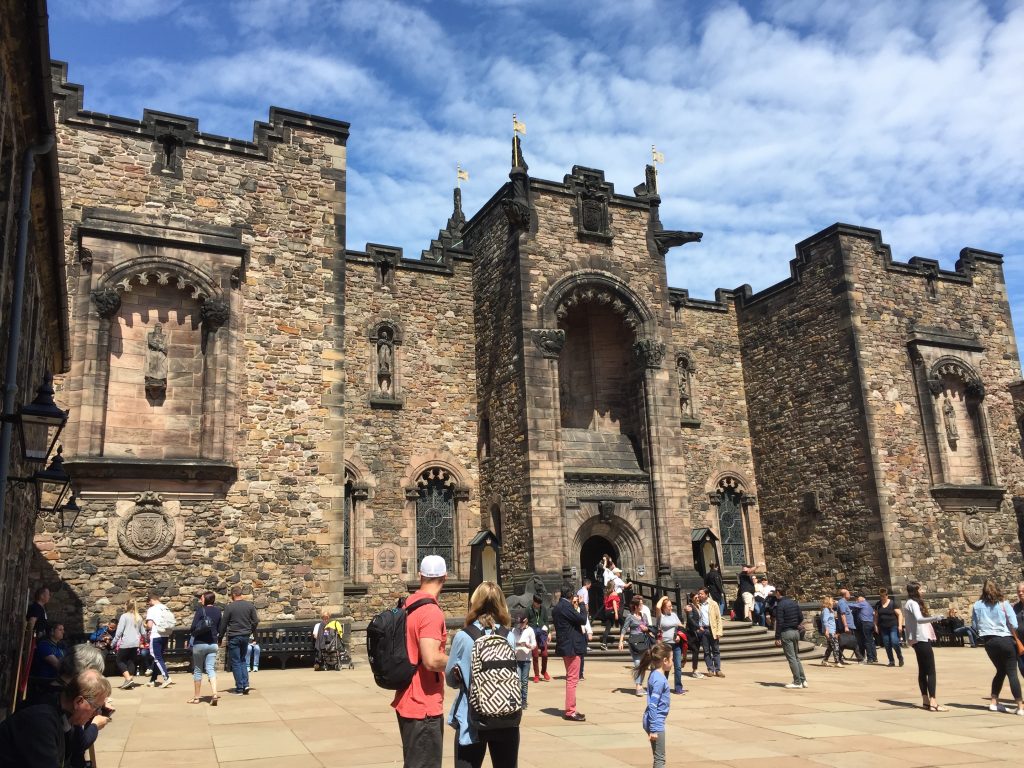 I always visit the Scottish National War Memorial when I’m at Edinburgh Castle. This is an incredibly powerful place. Built in 1927 by Sir Robert Lorimer, it holds printed books with the names of every Scottish man and woman who died in service in conflicts from WWI on. It’s a moving place that doesn’t allow photos inside, which is s good thing; it’s a place to reflect and honor of those who died in armed conflicts, especially the  many, many of WWI. You really understand the impact of that war if you look at any one of the regiments’ books of names. 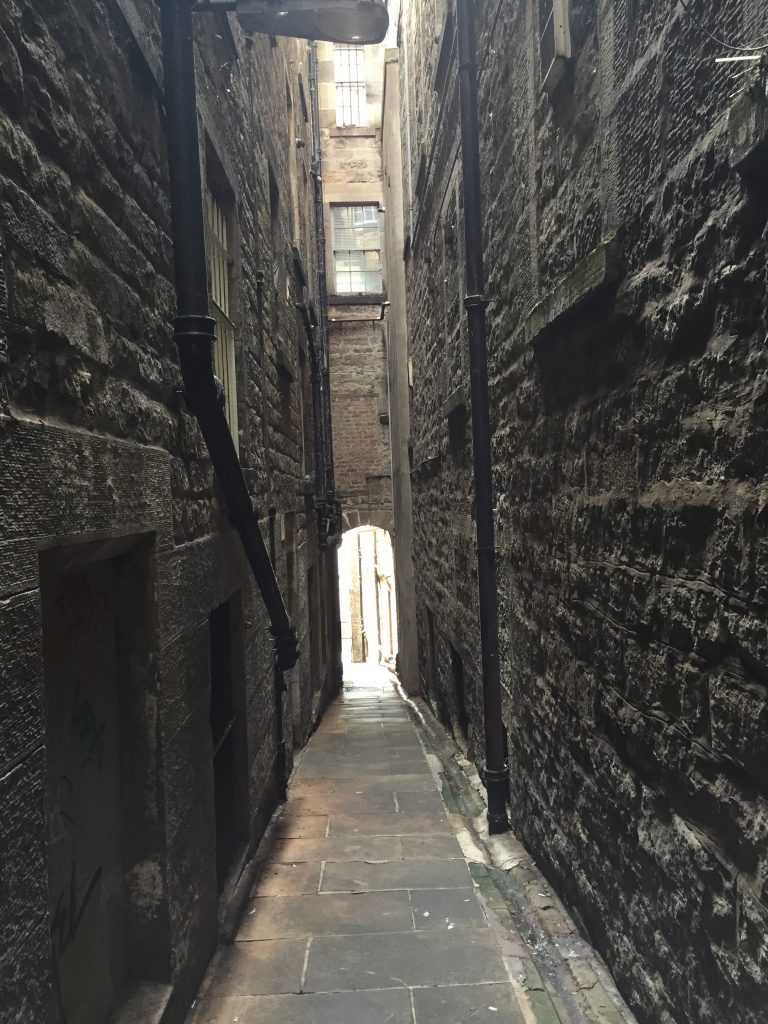 The Royal Mile, an important road in the Old Town, goes all the way up to Edinburgh Castle. And of course, lots of people wander down it from the castle. When you’re wandering the Royal Mile, you’ll notice all sorts of interesting bits of history if you look carefully. Here’s one of them: Borthwick’s Close, one of the many narrow passageways between the historic buildings. Borthwick’s Close was once one of the crucial byways that helped people get around what was a fashionable place to live in the early 17th century. Houses were huge, towering, and tight, and the streets were long. Closes like this led to other streets, and sometimes courtyards or other houses. These days, most closes lead to restaurant back doors or are places where residents put their rubbish (trash, to those of us in the U.S.). Borthwick’s Close now leads to an apartment complex, but we can still imagine the history of this spot. 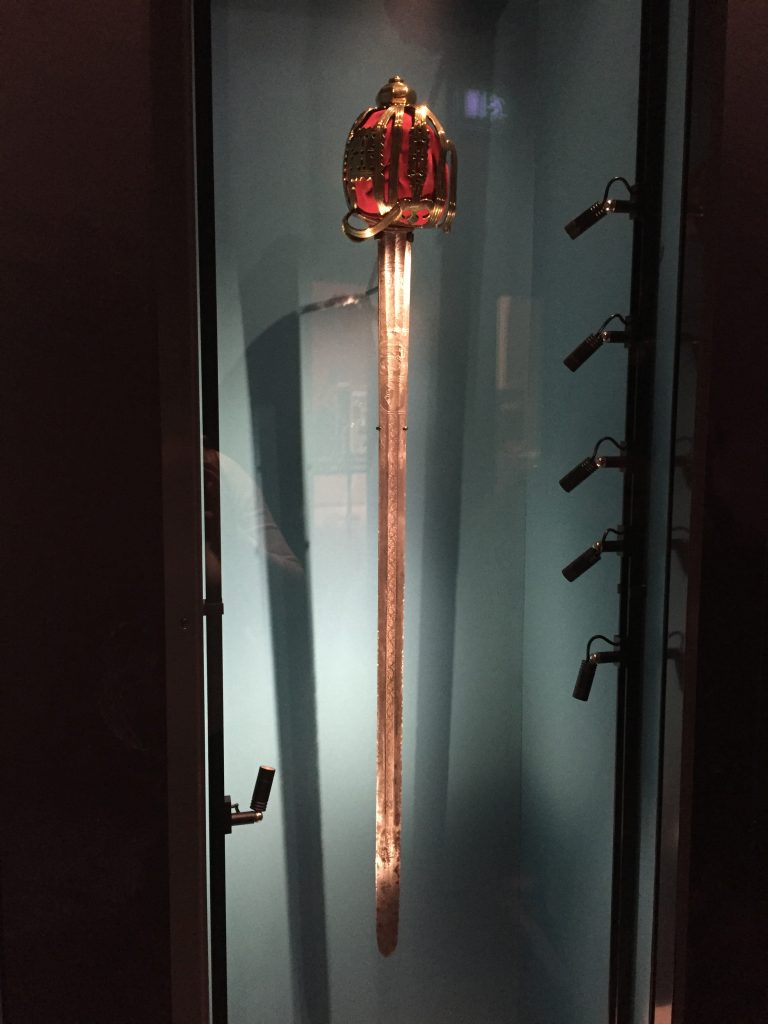 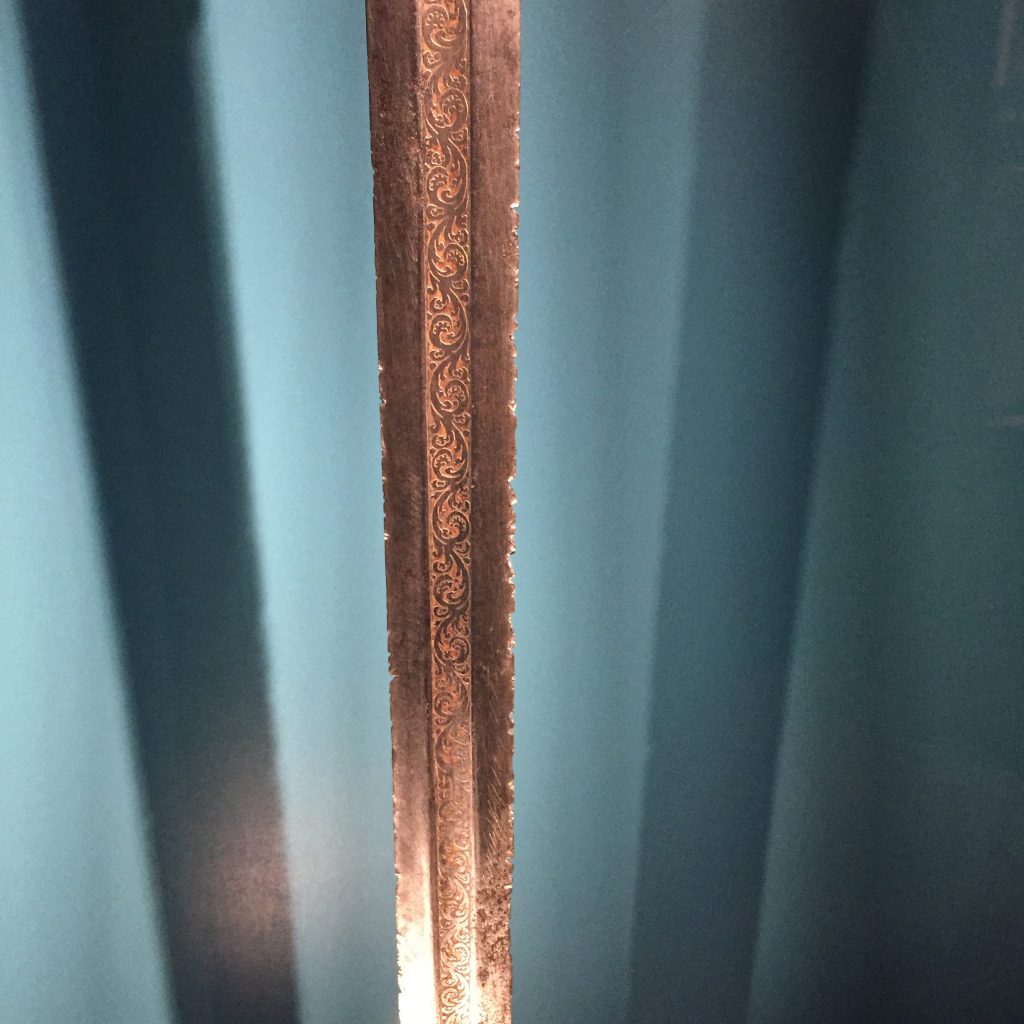 You knew there’d be a sword picture, yes? Well, this is a beauty. It’s a basket-hilted broadsword, c 1715, which greeted me as soon as I walked into the National Museum of Scotland’s gorgeous and insightful exhibit “Wild and Majestic”. This weapon is from the Highlands, and looks as if it received some use (see the second pic). A sword of this era could stand up to the nicks you see a bit better than the swords in my books (which are from 500 years before). By the way, a lot of people think my books (which are set in and around the Lothians and the Scottish Borders) take place in the Highlands, which is an understandable mistake. This exhibit brilliantly explains why the common perception of Scotland is of Highland Scotland. 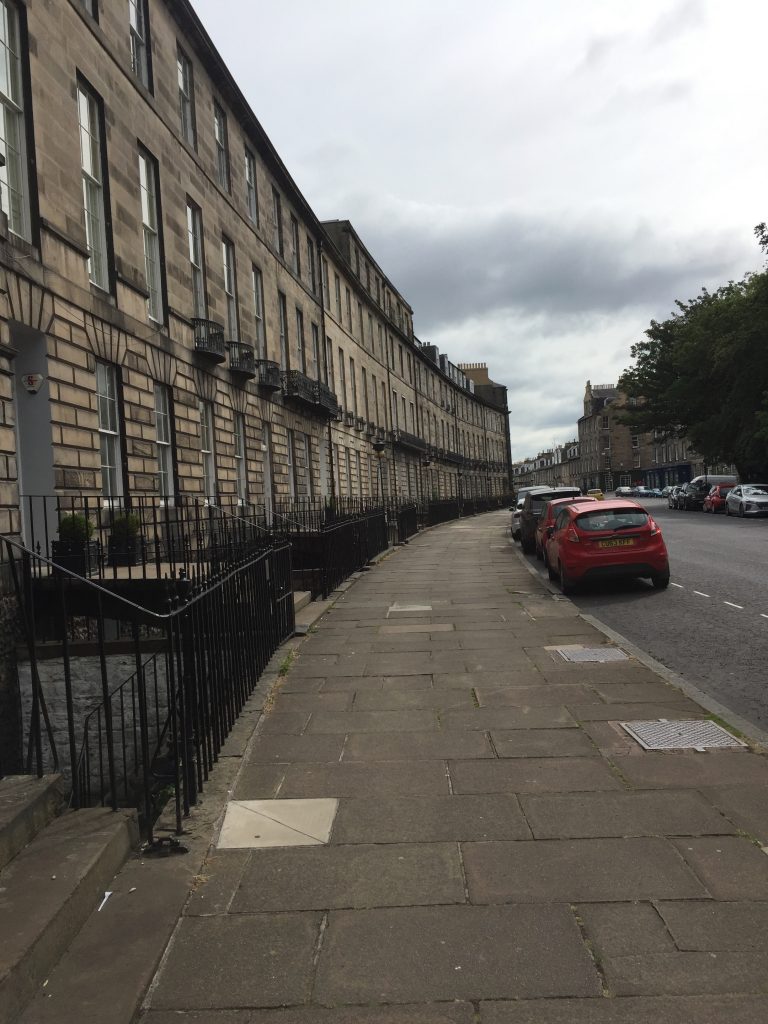 Onto the New Town, with a picture of the street where I stay when my family visits Edinburgh. The New Town isn’t known much by tourists, as there aren’t many attractions of the kind one finds in the Old Town (the Royal Mile, Edinburgh Castle, etc), but it’s one of my favorite places to wander because of this: rows of Georgian houses in crescents and “places” with parks in between. These were built during the early 1800s when the city was as a hotbed of intellectualism and culture and decided to clean itself up a wee bit to compete with elegant cities in Europe. James Craig (at only age 26) was the architect who designed the New Town, down to and just past Princes Street.

Now, let’s wander to a different part of Edinburgh, past the New Town, into what was once a difference town altogether. Dene, as it was known in the 11th century and on for a bit, was a village with a powerful tradition of milling. That it’s on the Water of Leith, a lovely burn that snakes through Edinburgh, makes a lot of sense. The Water of Leith goes right by St. Bernard’s Well. 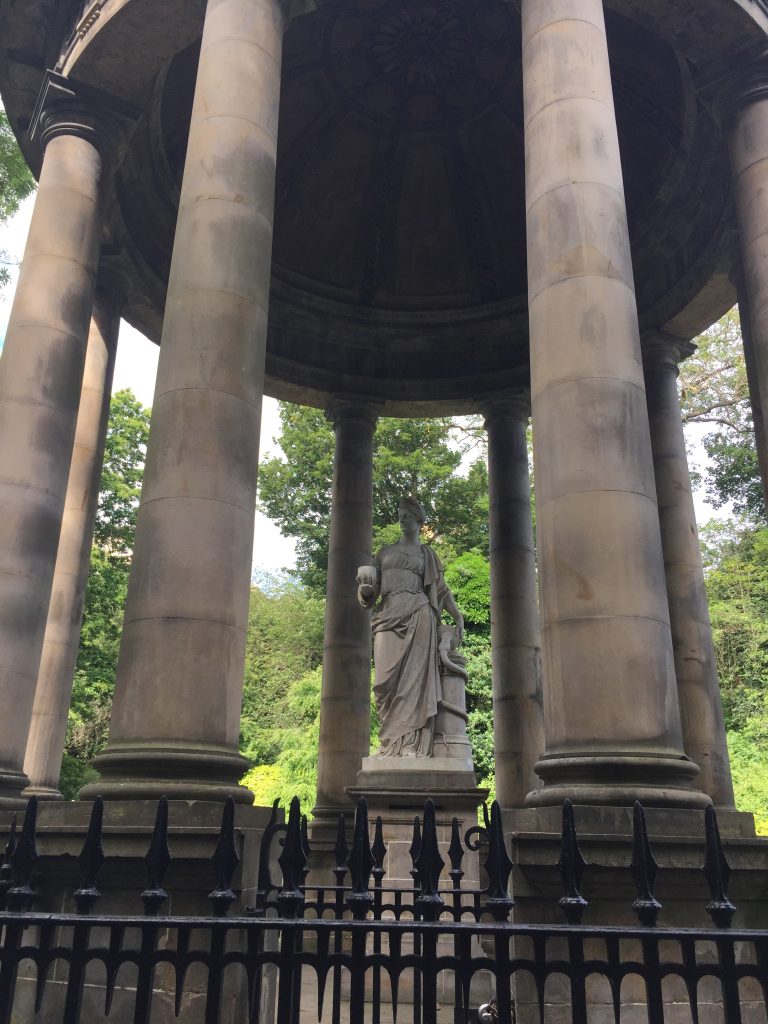 St. Bernard’s Well is a lovely spot on the walk to Dean Village, an ornate structure with Gothic columns. People came here for the mineral waters, and in 1760, this well marked the site of a purported healthful spring (though one person described the taste of the water as being like “the washings from a foul gun barrel”). In the 1940s, it was closed due to things like arsenic in the water. 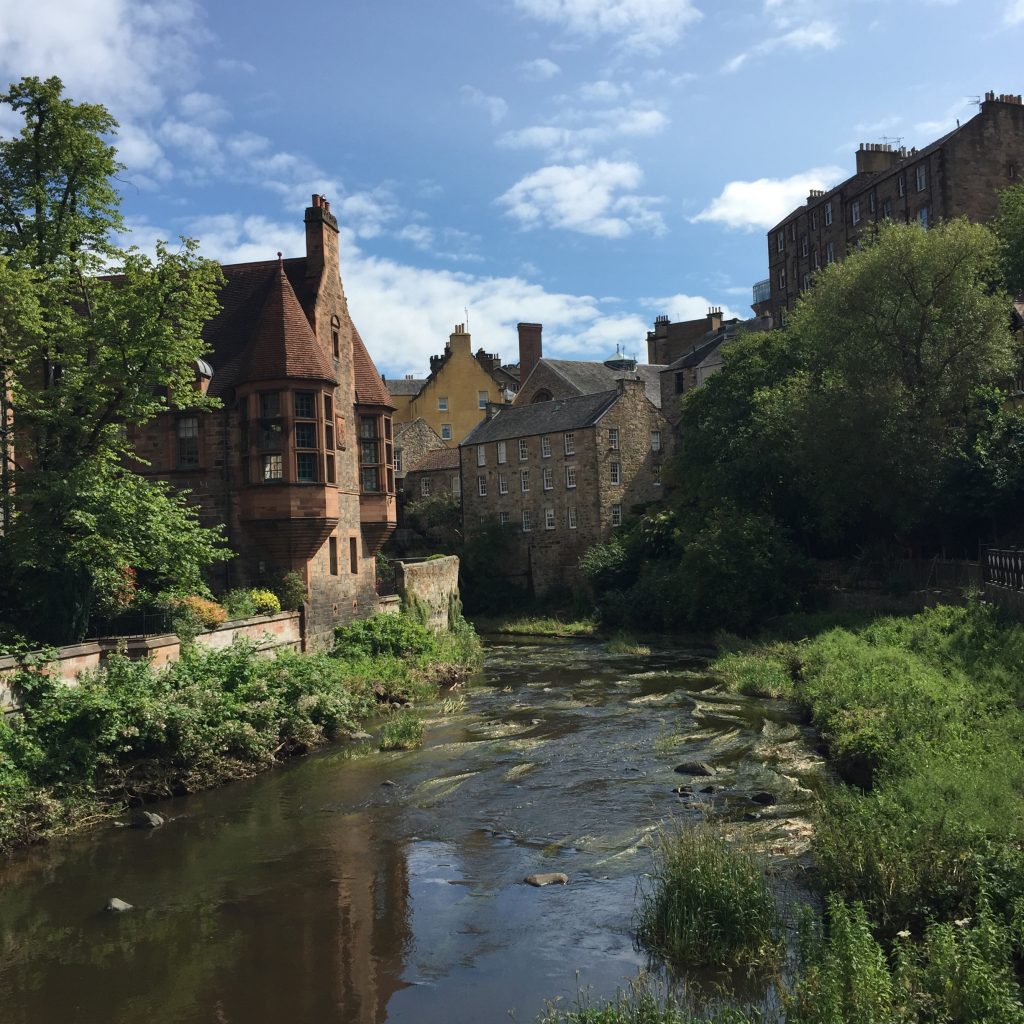 A few pictures above, I mentioned the village of “Dene.” These days, it’s called “Dean,” and this was my first visit to it. Dean Village was its own separate village until it was sold to an Edinburgh provost in 1826. Here’s a very famous view.

In Dean Village, one of the most historic places is Well Court. This is a series of buildings built in 1886 to provide good, affordable housing for local people and to encourage community with common spaces. It fell to ruin over the years but was renovated in 2007 with a similar aim. This is the courtyard, and while we were there, we heard a wisp of Scottish folk music playing from upstairs in one of the flats, pots clanging as someone was cooking in another one, and people chatting with friends. This would be a lovely place to live. 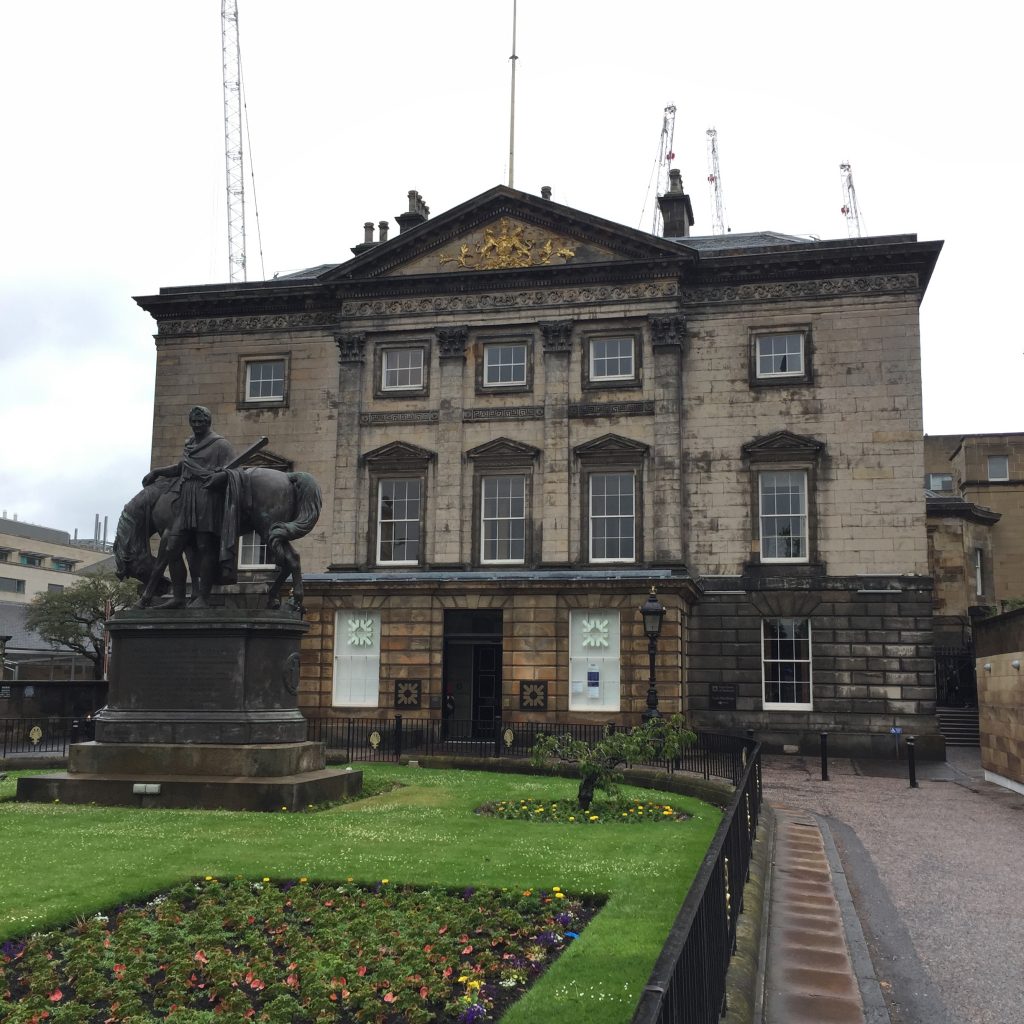 Back in Edinburgh proper, and to St Andrew Square, where this gorgeous little mansion sits. Dundas House was built in 1774 by architect Sir William Chambers for Sir Lawrence Dundas, a businessman who worked with the British during the Jacobite wars. It became the Royal Bank of Scotland’s headquarters in 1825. When you start learning the players in history here (especially during the period of the Jacobites), you’ll find that everything starts to connect. And buildings like this tell their own stories. (By the way, it’s still a Royal Bank of Scotland.) 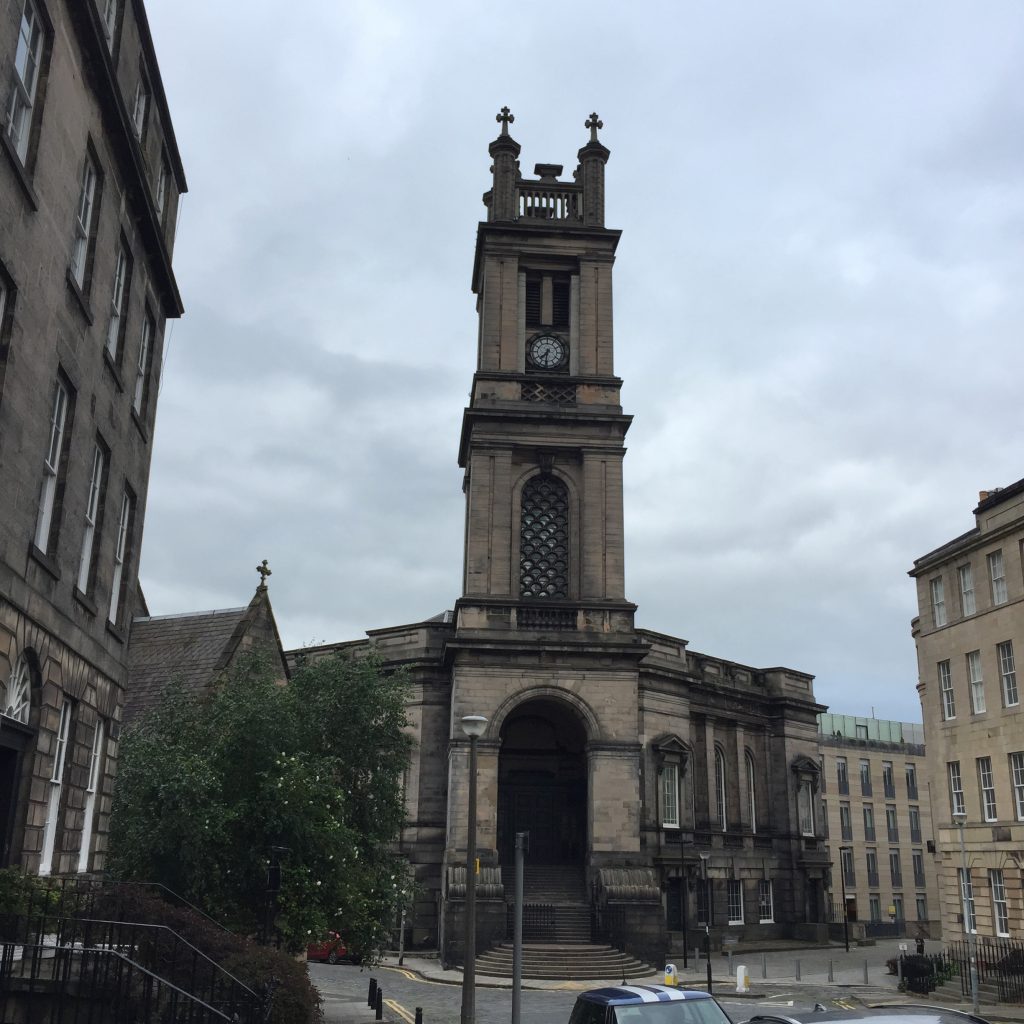 As you can tell, I was really drinking the history of buildings in Edinburgh. Here’s another building that I passed often and absolutely adored: St Stephen’s Church, which dominates the start of Stockbridge near the New Town. It was built in 1827 and 1828 and is one of the masterpieces of William Henry Playfair, one of Edinburgh’s renowned architects of that era (he did monuments too). Its use as a church declined more recently, and it was purchased in 2014 by a private owner and now is a performance space. I’m grateful that a commitment has been made to keep this stunning landmark intact. 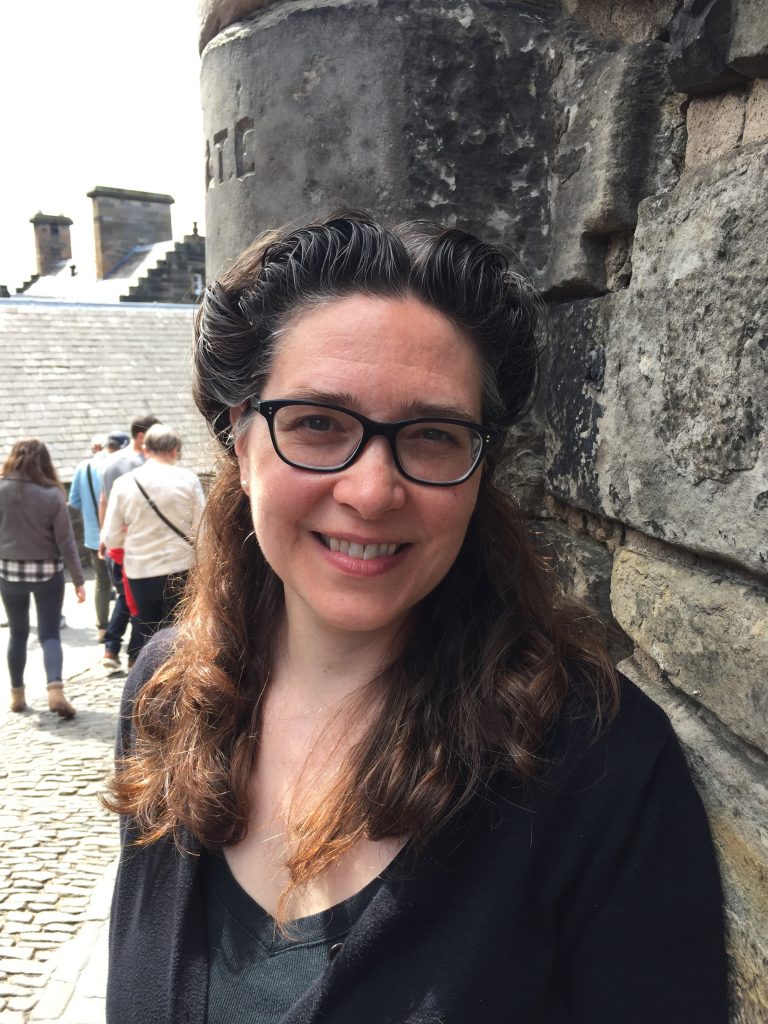 I’ll end this post with one of my family’s traditional photographs. Each year, my husband or son takes a picture of me beaming at Foogs Gate, a 17th century part of Edinburgh Castle. I love being here, and Foogs Gate was once an entry, and a checkpoint. It’s a place where I always pause to soak up the history and reflect on how happy I am to be there.

4 Responses to “A New Year, and Looking Back”