I was going through my files recently, and noticed a tribute I’d written for a very dear friend I had during my early career here in Maine: Eileen Curran (born 1927), the Victorian scholar, who I’d met in 2004. Every once in a while, I’ve found that I meet people with whom I have an instant bond. Eileen was many years my senior, but she came into my life as I was researching the Victorian period for a historical novel I was writing. Back then, I was fascinated mostly with England (Scotland was certainly an interest, but not the obsession it is today—it became that shortly thereafter). My interests at that time made my meeting Eileen quite advantageous, in many ways, and for both of us, I think. Here is the tribute that I spoke at Colby College’s Special Collections in October 2013 for the Maine Humanities Council board. (I thought it might be fun for readers who know only my attention to Scottish castles to see that I’ve had other influences.) —Diane Magras 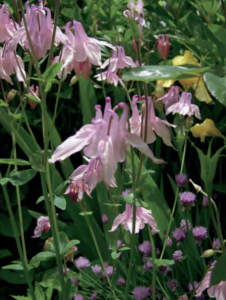 Each summer, Eileen Curran’s garden was the most colorful on her street: with pink lupine, ivory scabiosa, white violets, and golden gloriosa daisies among the most outstanding. Other perennials wove between them, creating a 19th-century tapestry of color and texture, like the gardens that had inspired the very concept of English cottage gardening. It made perfect sense that such a garden would surround Eileen’s home, or that you’d find further evidence of a Victorian life inside, where illustrations from Punch hung on the walls over William Morris “Willow” patterned wallpaper.

The first time I met Eileen in 2004, on a sunny early July day when her massive hedge of lilacs was the most striking thing in bloom, I had no real idea that I would be stepping into the home of a person who would inspire me so thoroughly. I’m one of those Americans who looks longingly at Anthony Trollope’s world: at the sense of adventure laced with certain good manners—not to mention the long country walks over a verdant English countryside and, yes, that abundance of boldly-patterned skirts—and I didn’t have many people in my life who were quite as obsessed about these things as I was.

Eileen, however, was. And obsessed with far more.

Eileen was like the Victorians she researched: while honoring the past, she embraced new technology, to the point of exclusively publishing her work online in The Curran Index of Additions to and Corrections of the Wellesley Index of Victorian Periodicals. Biographies of Some Obscure Contributors to 19th-century Periodicals, published on the Victoria Research Web, expanded the Curran Index’s content. These resources delved into the prolific world of Victorian men and women who published their articles, stories, poems, and essays with their real names, pseudonyms, and anonymously, but whose identities help researchers today weave together the booming industry of letters. (Dickens’s famous Household Words was only a small part of the picture.) 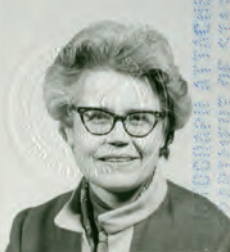 This is one of Eileen’s passport photos. She’d saved many from many years of primary source research in England, Ireland, and Germany.

The most obscure of these writers—writers who never published more than a few articles, those who were never sufficiently established, or those whose anonymous paths seemed to peter out in old parish registries—were Eileen’s special delight. She believed in the important contributions that anonymous writers made, and was like a private detective in seeking their identities—a detective who parsed through birth, death, and marriage records in small country churches, online, by phone, through microfiche, and through mail, to find all these “Obscures.” When I first met her, she had already mapped out hundreds of families in Britain. In my many visits to her house, with my cup of loose leaf Lapsang Oolong (Eileen’s favorite) and the most wonderful homemade biscuits outside of England, I heard stories of her “Obscures,” their families and their aliases and who they might have been but really were (as far as she knew; she was always open to corrections that might come up in future research, and never made assumptions without being clear that they were just that).

We also talked Victorian literature, but in a way that I certainly had never talked it before. Eileen spoke in casual conversation about the great Victorian authors and their characters as if they were old friends, often in present tense. And she spoke in gorgeous sentences, the kinds that these authors had written, composing in her head as she spoke. I don’t know how she did it (I need paper to build such sentences). She rearranged how one would normally speak a sentence, roll out a clever and unusual verb, and end with a punch line that caught you a second or two after you heard it. Eileen never laughed at her own jokes; she hardly waited to see if I caught them, though once in a while she’d pause with a slight eyebrow arch.

I spent the whole day with her on my visits. During those rewarding hours, Eileen also told me stories of her family, of her parents’ upbringing and her own. She was a precocious child (of course) who surprisingly didn’t speak until she was three years old, but began speaking almost at once in complete sentences. It was as if she had waited, listened, and learned. She had many opportunities to listen: her parents included her in conversations about educational theories, business, and WWII. They respected her mind. She graduated from Cornell University, where she also earned her PhD, and also was among the first graduating class of Cambridge’s Girton College in 1948. She experienced Austerity firsthand, living with a Cambridge family in town, and shared the care packages sent from home with them: packages of sweets, tinned foods, chocolate, and cigarettes (an excellent currency, she said). 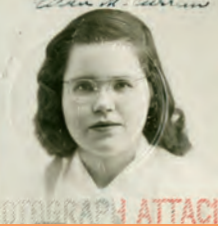 This is an early passport photo when Eileen was still a student.

We went out to lunch in Waterville most days that I visited. Once, in the private dark corner of a busy restaurant, hearing a story about her independent, free-spirited, curious, and intellectual schooldays, I felt a powerful connection: I had been exactly the same at my school nearly fifty years later, reading big books for fun in the corner of the library, finding few like spirits around me. If time and place had somehow put us together in the same town, I suspect we’d have been best friends. And she’d have probably egged me on to become a Victorian scholar, too.

The last time I saw Eileen, her eyesight was nearly gone—a huge blow for a person whose life was built around her scholarly research—but she was still able to see some of the walk we went on. I pushed her wheelchair around the oceanside path of her assisted care facility, up to the fading rosebushes and cold chrysanthemums. She spotted in the distance a yellow flower and though her distance vision was quite impaired, she opined its identity. I darted into the grass and fetched one for her. She was right. It was goldenrod, a weed in America, Eileen told me, but a fine addition to a cottage garden in England. We found a cup for a vase in her room.

2 Responses to “Inspiration with a Cuppa: Memories of Eileen Curran”