In the last story bite, we came up with an idea. Now we’re going to put that idea on the page. And what we’re looking for is…an opening line.

First, I want everyone to know that it is extremely rare for a professional author to nail that opening line in the first writing of the first draft. It took me about three tries and at least three tweaks to get the opening line for The Mad Wolf’s Daughter:

“The fog drew back upon the dark sea and revealed a gleaming point like a ship’s bow, which seemed to nod at the girl brooding by the glowing bonfire.” 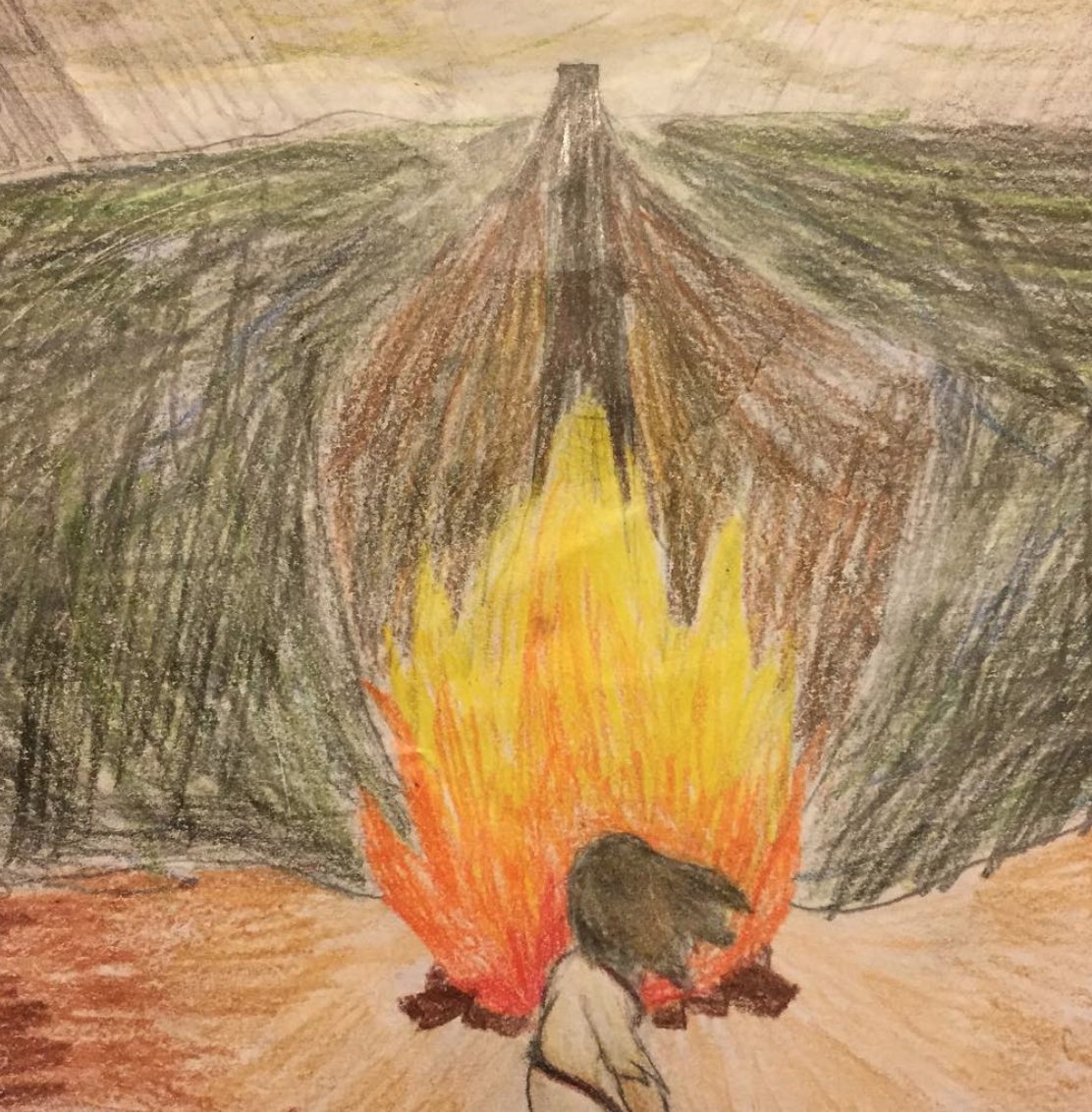 This is a picture drawn by a 6th grade student of this opening line. Cool, isn’t it?

An opening line is your entry into your work. Often referred to as a hook, it can also be an open door with a soft carpet: It’s something that will make your reader want to come in.

And opening lines are hard. It’s not uncommon for a professional author to sit in front of a blank page agonizing over that opening line. If you can’t think of a good one, you might feel stuck on the whole piece of writing. But there are ways you can write an opening line that will put you on your path, and I’ll let you into one of my tricks: It’s to use mentor texts.

A lot of you will have heard of this concept: Using a work of published fiction to help inspire or educate you about writing when you’re struggling with your own work. When I’m struggling with an opening line, I look at some of my favorites of my author peers to see how they managed to invite the reader into their story. Here are a handful:

1. “The first time the horn sounded on the hill, Wolf mistook it for a sheep bleating or a bird crying, and thought no more of it.”
—from Katherine Langrish’s The Shadow Hunt (first published in the UK as Dark Angels)

2. “Even the woods are burning.”
—from Philip Reeve’s Here Lies Arthur

3. “I have a secret.”
—from Megan Shepherd’s The Secret Horses of Briar Hill

And here’s mine again, just to compare:

4. “The fog drew back upon the dark sea and revealed a gleaming point like a ship’s bow, which seemed to nod at the girl brooding by the glowing bonfire.”
—from The Mad Wolf’s Daughter

Each one of these opening lines does something different.

1. In The Shadow Hunt, a character hears a sound, but mistakes it for something else. This kind of opening hints at tension. Why write about this unless it’s important, and the character is wrong in his assumptions? To model this opening, write about your character making a mistake about something: a sound, a sight, a taste, a smell. After this, you can have a line about why your character made that mistake—they were busy, distracted, unwisely certain—and go on from there.

2. Something very dramatic is happening in Here Lies Arthur. The author wouldn’t share that “even” the woods are burning unless that’s important. This opening implies that the woods shouldn’t be burning, but they are, because everything’s burning. And that immediately introduces tension. But it’s a basic statement, an observation. Write an observation beginning with: “Even the…” Think of something that shouldn’t be happening but is happening. It could be something disastrous that leads into your story, something that your character sees or feels as a result of a momentous event. (In this case, someone has just attacked the protagonist’s home, and everything is burning around her, and she’s woken up to the terror and chaos.)

3. In The Secret Horses of Briar Hill, the character declares something, and a secret is a wonderful something to start with: By its very nature, it has mystery and tension. Why keep it a secret unless it’s important? Think of what your character could declare. Start with “I have…” or “I know…” or “I saw…”

4. In The Mad Wolf’s Daughter, I wanted the reader to see what the character sees just as she sees it: something unusual, unexpected, sometimes that bodes ill. Put your character right in the start of an action and show something happening from your character’s perspective: something flying toward your character, or retreating. Modeling this kind of opening means you need to sketch out your character in a scene. If it helps, actually the scene with a pencil on paper (like the picture above) and see what you can write about.

If you’re still stuck after reading these examples and can’t figure out how to start, that’s okay: Open a book that you love and examine the opening line. Do you feel drawn into the story by that line? Write your own version of it for your work of fiction.

Once you have an opening line packed with tension or mystery, it’s a lot easier to write the next: You already have a sense of where your story might be going.

I hope this helped! If you’d like to share your an opening line with me, please submit it through your teacher or with your school email address or home email address and include: your first name, grade, school’s name (or “homeschooled”), town, and state.

Teachers: if your make this story bite part of a lesson, please let me know how it went. And I’d love to see your students’ work.