In my school talks, I chat a wee bit about the weaponry mentioned in my books. And after a visit early this summer to the National Museum of Scotland in Edinburgh (my favorite museum ever, by the way), I’ve some wonderful examples of medieval weaponry and armor that link nicely to my books. 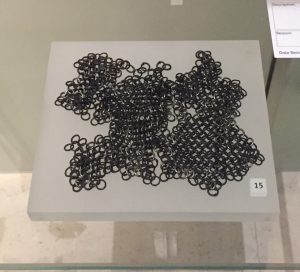 First, here’s a piece of pre-medieval chain mail to get a sense of what Emerick‘s wearing early in Book 1. Remember that hauberk that Drest helped him remove? This weave of metal rings would have been what she was touching. They were a bit more densely patterned in the time of the novel (1210), but this gives you a nice close-up of what chain mail was (and now imagine the intricate work of blacksmiths who created it). 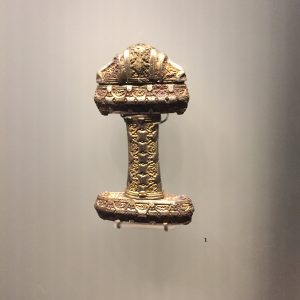 Next, I was thrilled to see this Viking-era sword pommel. While it’s a ceremonial one that was likely never used in battle, it’s similar to the one I envisioned for Borawyn (based on a pommel in the collection of the British Museum). This is such a gorgeous, ornate treasure. Frankly, I’m always in awe (and in envy!) when I see this museum’s amazing collections! 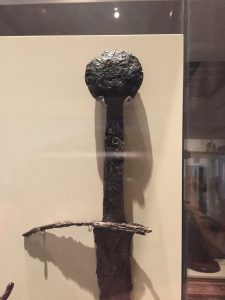 Next, this sword is almost a perfect match of Tancored’s hilt, from The Hunt for the Mad Wolf’s Daughter. And this is exactly the right style and era (which makes me very happy, as I had not seen a sword I was using for this book, and just made it up based on research)! The only difference from Tancored is that the pommel of Drest’s sword is square, not circular. (But she gets one with a circular pommel later on.) This sweet hilt is a bit careworn, but that comes with being a 13th century piece of metal. 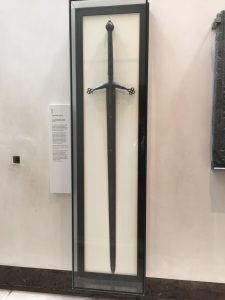 Last of all, I figured I owe the kids at my school talks who ask me about my sword pin a picture of what that sword really is. Here’s a real claymore, which comes from the 1300s, which is about 100 years too late for the Drest books.

But a claymore could very well show up in another book…

One Response to “Real Medieval (and pre-Medieval) Scottish Weaponry!”