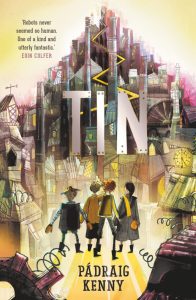 It’s not much, really, but the orphan Christopher is pleased to be the only “real” boy among his companions in Mr Absolam’s scrapyard, a place where mechanicals—boys with some human parts but mostly metal ones, parts joined by magic—train to be as real as possible for the human families that will, they hope, one day buy them. It’s a bleak existence made bearable by the warmth between the mechanicals and Christopher, and Estelle, a human girl whose artistry can make what it metal look very human. But an accident reveals a gut-wrenching secret. Then a very talented mechanical-maker who has plans to make a new kind of mechanical, an illegal kind that would change the world, kidnaps Christopher. It’s up to the denizens of Mr Absalom’s scrapyard to rescue him.

In the very beginning, Kenny presses on that last theme powerfully. Christopher and Jack, his best friend among the mechanicals, are going with Mr Absalom to present Jack as a potential new “son” to a family that has just lost their son. Christopher’s memories of his dead parents still hurt, and when he learns why Mr Absalom had picked this family, he “tried to dampen the hot, sickening anger he felt.” The market is for mechanical servants, but Mr Absalom has discovered a niche. But Christopher knows that it’s simply wrong. A family can’t just be purchased.

But a family can be formed by love, trust, and even sacrifice; Kenny smoothly sets that theme in motion as soon as he introduces the reader to the cast of rescuers. There is Rob, the mechanical who wants to be human and wants most of all to whistle; Grabber, whose language is muffled but understood by his friends, and whose immense body and strength ensures that he will never be mistaken for human; Jack, who questions the world and demands justice very much like certain middle grade kids we all know; and Estelle, the one human, who is dogged in her determination to rescue Christopher, and has her own family secrets.

A brilliant, crusty, selfish old inventor with ties to Christopher plays a crucial role in the story, as does a cast of broken mechanicals, depicting a “family” built on dependence and hope. Their first scene shares intricate details, fantastic invention, but a tragedy pulls at it, since none of these masterful mechanicals quite work. And this is one of the emotions that runs through the book: the sadness of life. This is not a steampunk tale thrilled with its own marvelous creations, but one that feels distinctly real.

Even with that reality, that tinge of melancholy, the story is rich with warmth. Jack is nearly always upbeat and confident. Estelle is serious and fiercely determined, and they’re emotional foils for each other. Rob is a wonderful comic presence, always trying to do what’s right and not always quite understanding what that means. And Grabber—far more machine than human—has a beautiful sweetness, even as he’s tearing apart an impassive metal fence to let his companions through.

And Christopher, as he learns about his identity, his past, and determines his presence, his brave, fallible, and utterly real.

We’re sharing the chair now with me in charge of the writing (see my last two reels for context).

Isn’t it like a massive dose of marshmallow frosting? Or a drippy cloud. Or a cuddly blanket holding that tree close.

I love this billowy, beautiful snow no matter what simile one might think of!