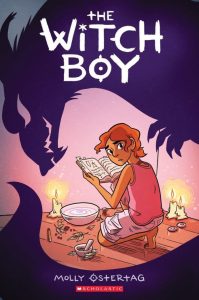 Aster has a problem. He’s 13, the age at which he should know the animal into which he will shapeshift, a crucial part of growing up as a boy in his magical family. But Aster feels no connection to any animal, and doubts he will ever learn to shift. He’s far more interested in the potions and spells that his sister and female cousins are learning as they mature into full witches. But he’s always being chased away as he tries to eavesdrop on their lessons.

“This lesson isn’t for you,” his aunt tells him in the first pages of Molly Knox Ostertag’s graphic novel The Witch Boy. “These girls are learning secrets.”

Secrets of more than one kind abound in this book. Sensitive Aster isn’t the only family member who has known he’s a witch deep down inside: He’s heard the cautionary story of Mikasi, his matriarchal grandmother’s twin brother, who sought to become a witch and became a monster instead. Read More…

(This review was posted on www.mgbookvillage.org on January 17, 2018.)