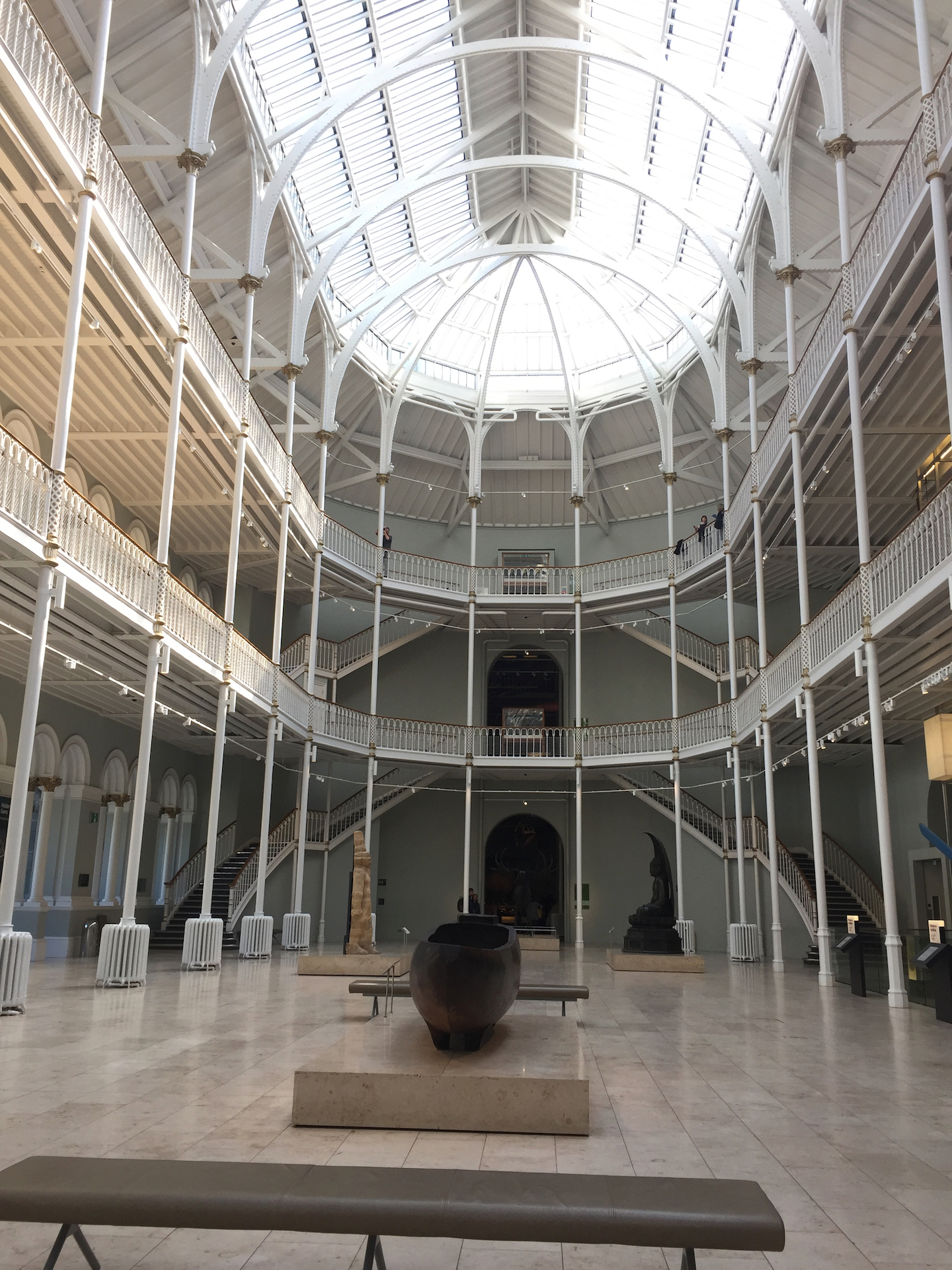 One of our first visits in Edinburgh this year was to my favorite museum ever: the National Museum of Scotland. It’s an incredible place. What makes it especially close to my heart are the magnificent exhibits of Scottish history, starting from the forming of the earth, lochs, mountains, and hills (the Borders!!!!) to the modern day (including a description of what led to the #IndyRef movement). Naturally, with its ancient and medieval Scotland parts being so inspiring, Drest had to visit.

We stopped by to say hello to the ancient kings who share Drest’s name. I describe in my Author’s Note to The Mad Wolf’s Daughter  (and in the book itself through Emerick’s comment) how “Drest” comes from the ancient Picts. (As I say in my school talks, these people were the reason for Hadrian’s Wall.) This museum wall depicts the names of the ancient Scottish kings. There are ten variations of “Drust” (along with patronymics, in some cases), one spelling of my wee lass’s name. 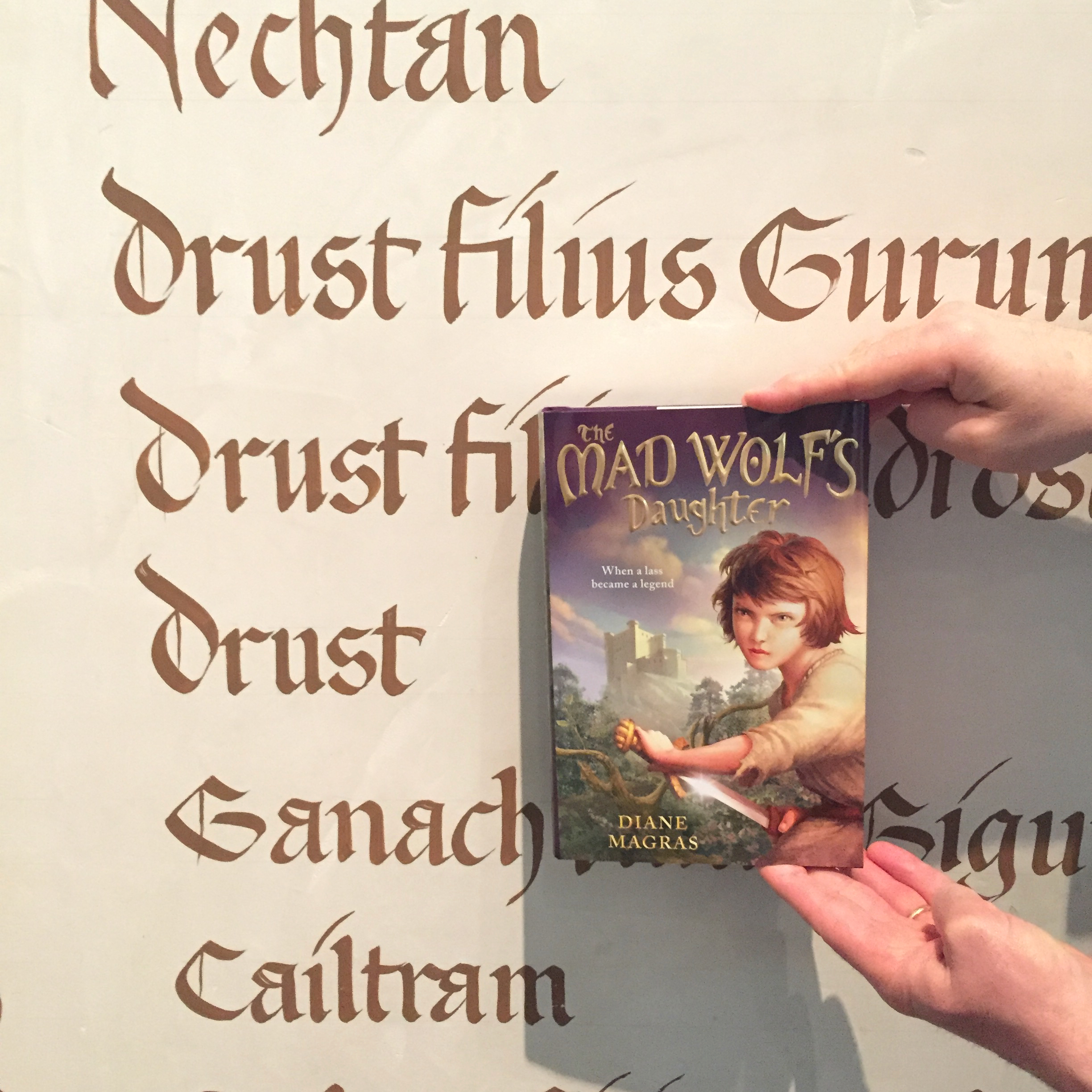 I love these names. (Perhaps I’ll name someone Caíltram in a future book!) (Photo: Diane Magras)

Our next stop was to a beautiful ancient stone. These carved stones are one of the great treasures of this museum. They show religious imagery or the Roman influence from the very distant past, stones with carvings that tricky to understand, and then ones like this that give a glimpse into of what life had been like. This stone from the 900s tells the story of a war-band (perhaps several, in fact). Note the intricate carvings of horses, helms, swords and spears, and round shields. My wee lass would have been fascinated by all of this, and any stories that came with it. But no one knows precisely what this stone’s story is, which leaves it up to us to imagine it. 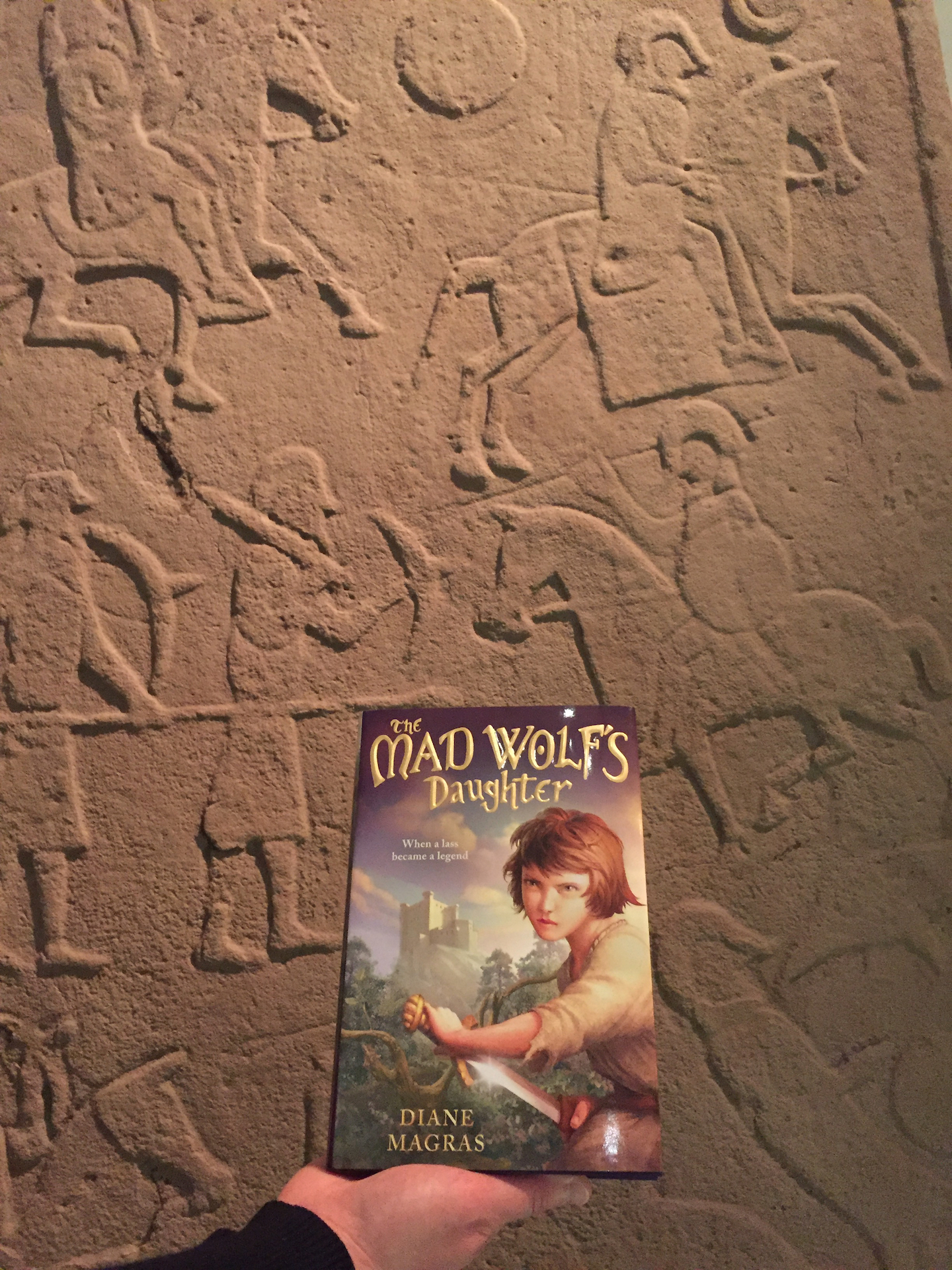 I shall make a bold claim: Pictish stones are the best. (Photo: Michael Magras)

And finally, to my favorite Scottish king! Here we have a claymore as part of the exhibit exploring the world of Robert the Bruce (pictured in statue form behind Drest). Robert the Bruce was a pivotal king of Scotland, a man with a complicated past who helped the Scots win the Wars of Independence against England. He spent a good chunk of his life on the run in the Highlands (a life Drest would easily sympathize with), and every part of his life was a fascinating story. I don’t think I’ll ever write it, though; I like to explore the people who don’t make a mention in history books, “real life” people, as it were, with their small legends, and to show how much they mean in their own worlds, even if they’re not famous kings. Still, this king was one whom I wanted Drest to meet. I think she’d have liked him. 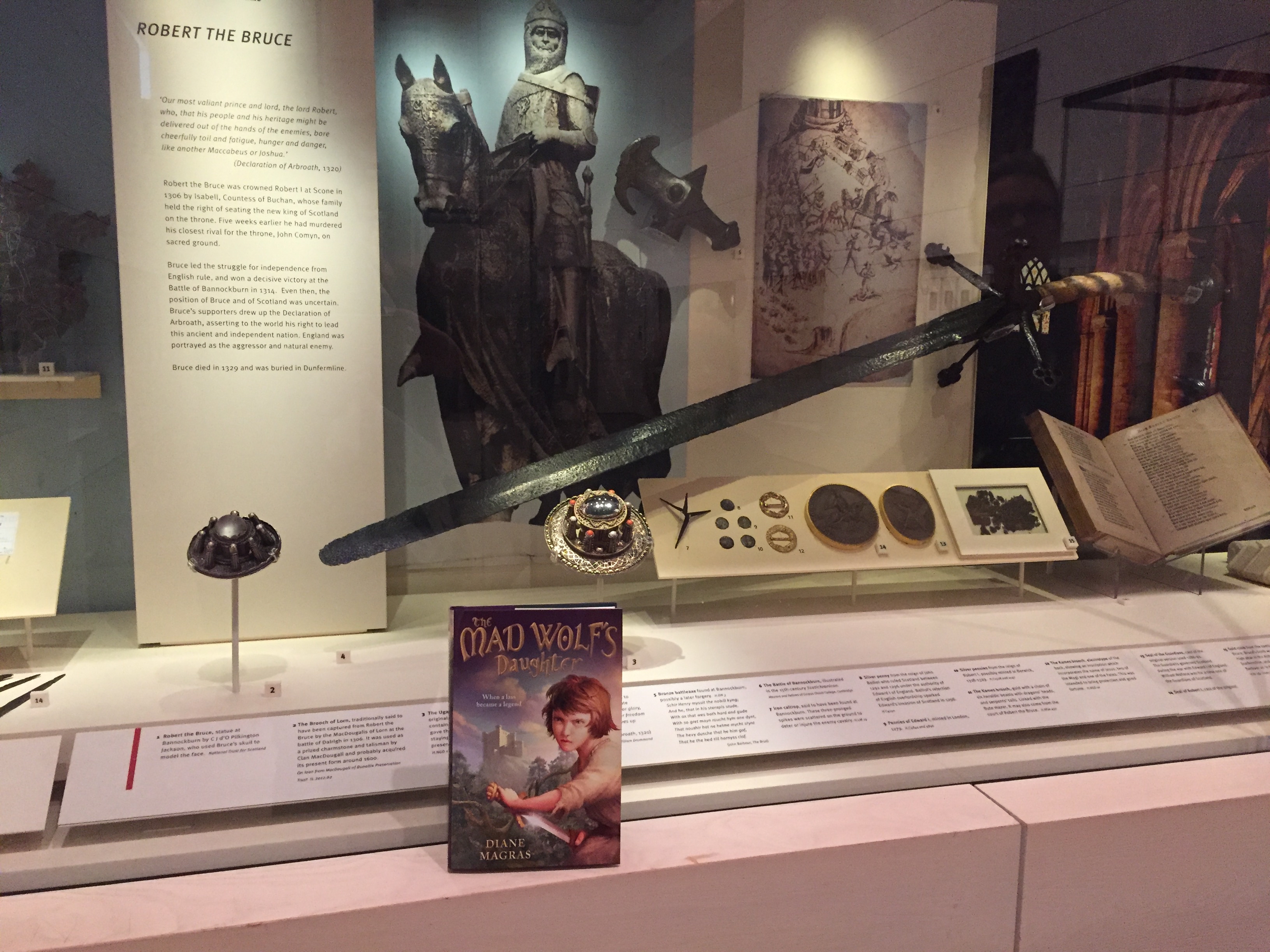 And what a lovely claymore! (Photo: Diane Magras)

That’s this entry, ending with a view of the exterior of this beautiful museum. It’s so worth a visit (and, indeed, my family visits at least twice each time we’re in Edinburgh). 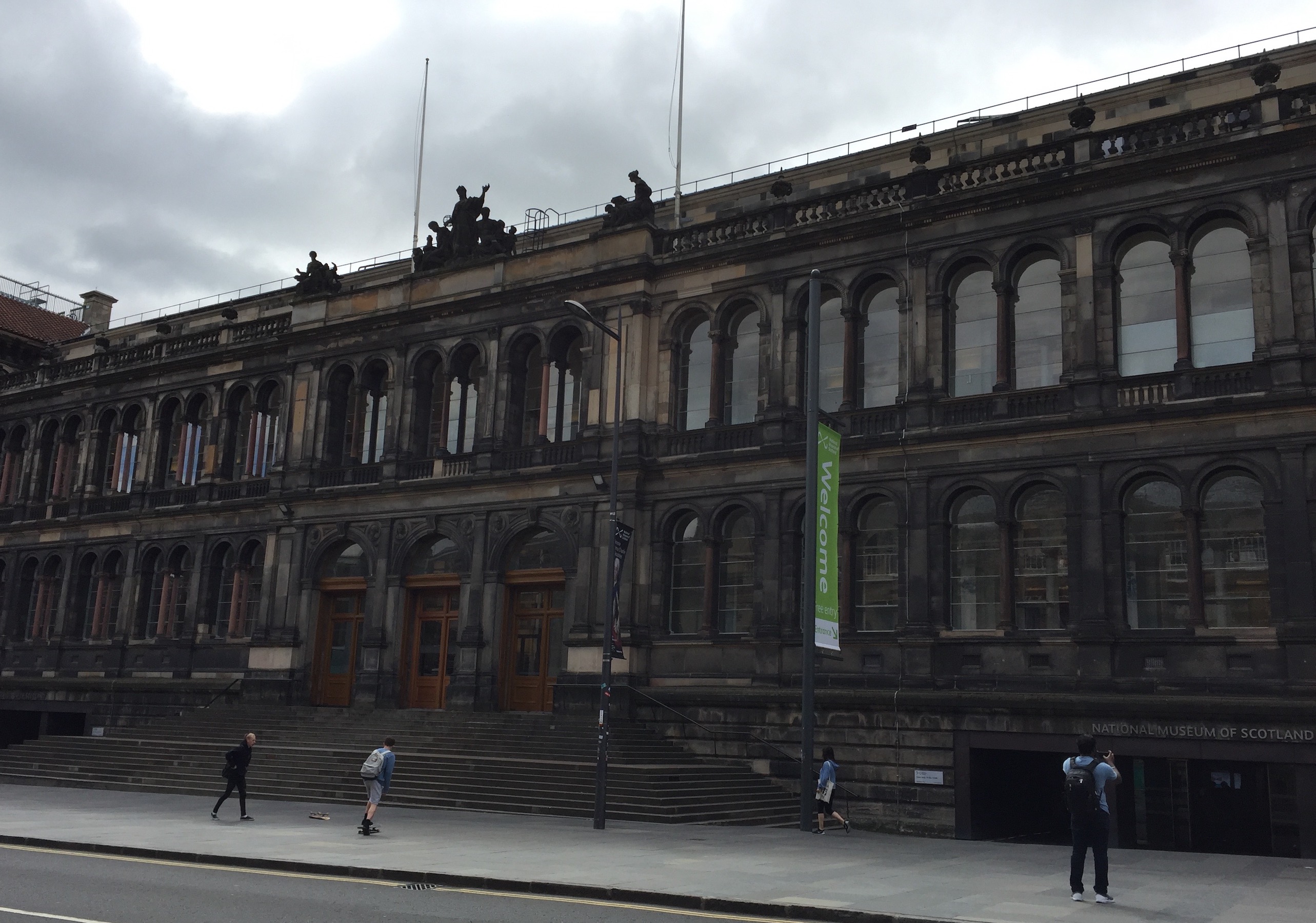 The National Museum of Scotland from the outside. Photo: Michael Magras